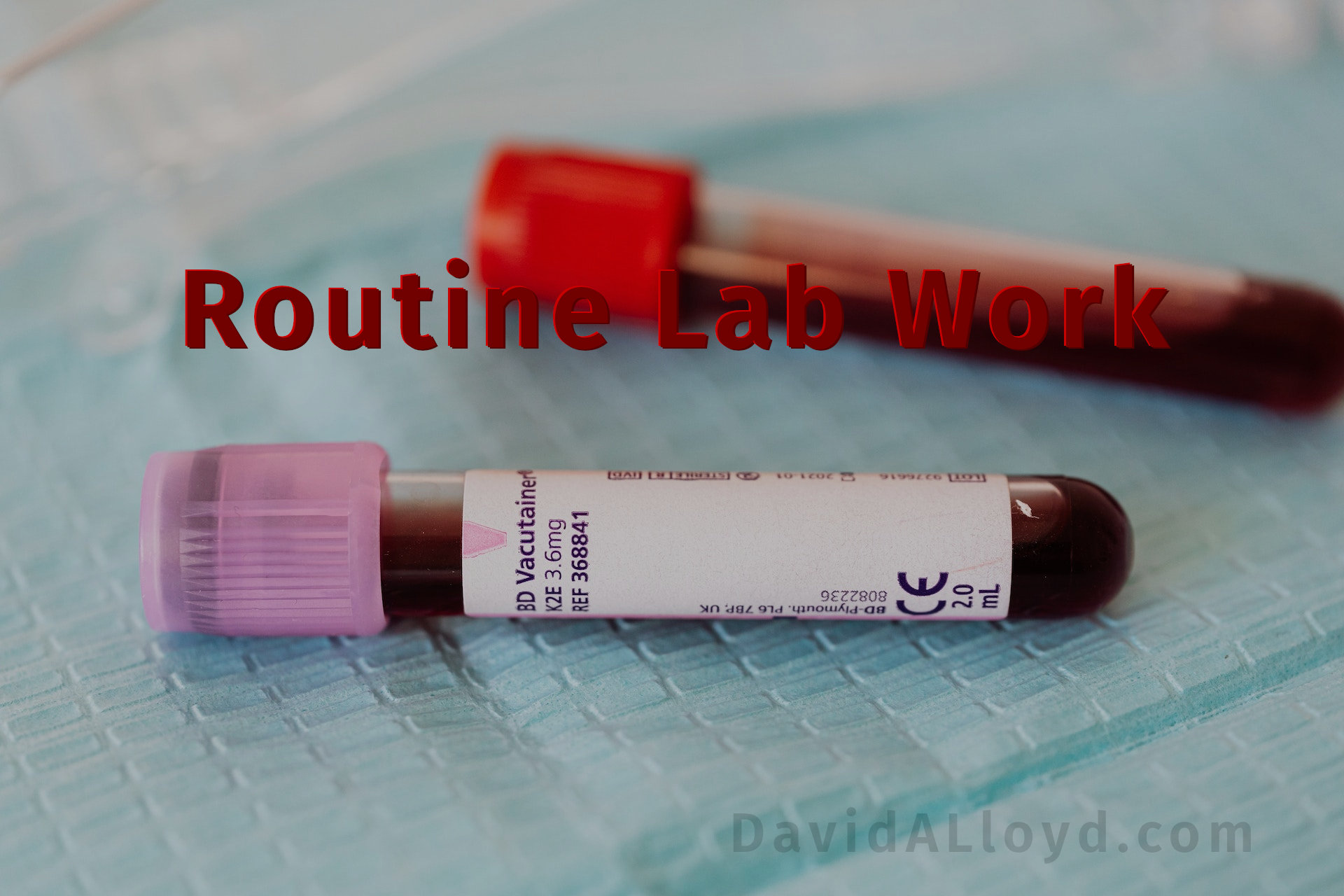 Since doctors are not required to take a proper nutrition class in medical school and are lied to by multiple sources about the health effects of an ancestrally appropriate diet, and since I follow such a ketogenic diet, I get my lab work done routinely to prove that my way of eating is actually healthy and beneficial. Since I am already getting these lab results, I also throw in a couple of other critical ones for general health. This story is about one of those, the Prostate Specific Antigen (PSA), whose changes over time give an indication of possible abnormal growth or cancer of the prostate.

My PSA numbers starting trending upward, and then sharply upward, so I scheduled an appointment with my urologist to rule out any potential health problem. The PSA number can go up, especially with age, so I was not terribly concerned, but it is good to get it checked. Their PSA test came in significantly lower, close to my normal, and they noted my prostate was a normal size and shape for my age. Whew, that’s some good news! However, the genome test came back with a 47% likelihood of cancer. The urologist recommended I get a prostate biopsy, as it is much more conclusive than the PSA and exam.

This procedure is extremely common, with a very low problem rate. Just a routine biopsy. Nothing is ever just routine for me, but this is incredibly low risk so I decided to do it.

During the biopsy, one machine freaked out, blaring an earsplitting noise. The nurse tried to stop it, another ran in to fix it, even turning it off did not stop the alarm. The doctor tried to resume the procedure but said he could not think with that noise. Finally, they figured out its problem, and the alarm stopped.

When the procedure was over and the doctor was making sure all was well, he discovered a rectal bleed from one of the needle holes. He remarked how unusual that was and packed gauze to stop it. I am used to having bleeding problems through my childhood, but only had problems once as an adult. When I had my deviated septum repaired and sinuses expanded, the doctor spent another 13 hours to stop the bleeding. I figured this was that old problem raising its head again, but the bleeding stopped in about 20 minutes this time. This is the first time this much bleeding has ever happened in the well over 5000 biopsies this urologist has performed.

The biopsy occurred on a Friday and the entire weekend went great. However, Monday morning, I expelled a very large quantity of bright red blood into the toilet. I called the on-call service and left a message. About 90 minutes later, it happened again. I then called the surgery center and left a message. At 9:44am, the urologist’s office calls me and asks if I am available to come in. “Yes! I can be there in 20 minutes. When do you want me there?” She said, “You can come now.”

I sat in their waiting room for 45 minutes before the doctor saw me and so it had been about 2 hours since my bleeding. The bleed had slowed to a trickle. He thought I should wait and see if it would heal on its own since I went all weekend okay and it was slowing now. Of course I agreed. The alternative was to go into surgery with general anesthesia to put in a stitch to close the wound. In one way, I felt better that it was not my old bleeding problem. This actually might need a stitch to close.

Monday afternoon I had two smaller expels of blood, and then a larger one, and then a massive expel that scared me! I called Donna and said I have to go to the emergency room! She knows I hate that place and I have not been for myself in 31 years. This was serious. She was already on her way home, so she arrived quickly, but before we could leave, I had to go again. Another massive quantity of blood came out. I put a towel in her car seat just in case and we left for the E.R.

A little while after checking in at the hospital at 7pm, we heard the intercom announce an ambulance arriving, and then another. A short while later, they announced a few more. By eight o’clock, eight ambulances had arrived. From the quantity of cops and lack of anyone going back for hours, these must have been serious traumas. Even though I was bleeding from my bum, they did not see me until a little after 2am!

A physician’s assistant did my initial evaluation, and he was completely confused. He thought they performed prostate biopsies through the urethra! This did not bode well for me getting better here. He then thought some other injury occurred and seeped in that direction. No! I explained again what happened in the biopsy. The urologist knew his needle must have sheared an artery on the wall of the colon while collecting a sample. I explained he had already consulted with a colorectal surgeon who agreed I would need a stitch at that location. The P.A. said there was no way they would do a stitch in that location, and no way my doctor would want such an invasive procedure done. After some polite back and forth, he was still confused so he woke up the doctor.

The E.R. doctor obviously had no experience with this kind of injury either. To her credit, she ordered a CT Scan to rule out internal bleeding. Once she had that confirmed, and seeing that my blood counts looked okay, she said I should go home and hope it heals. If my blood count goes too low, come back and they will reassess the situation. They flat out said it would have to be life-threatening. Nine hours at the E.R. and zero progress. This is why I hate going there.

We went home and slept two hours, got Madi to school, and Donna stayed home from work to sleep some more. I could not sleep more than another hour. My day was already rough, bleeding a good bit, but not nearly as much as the evening before. The afternoon got a little worse, but I ignored it. I knew the E.R. would not consider me dead yet. At 8pm I had a horrible bleed. I went running to the bathroom seven times, exactly every ten minutes, each expelling a lot more blood. I texted my urologist, who gave me his cell phone number when I went in for the bleeding problem the day before. He said, “Enough of this. I’m going to get you to see someone tomorrow.” This greatly relieved my stress. He texted back ten minutes later with a confirmed appointment to see the colorectal surgeon he had consulted previously for first thing in the morning!

My joy was short-lived because I had another big expulsion of blood, got dizzy, sat down on the couch, and took my blood pressure. I had been monitoring it all day so I would know when I could go to the E.R. It failed to register any. I tried again. We tried my other arm and got a diastolic of 47. Donna put it on her arm and it worked. Yeah, this is not good. I got dizzy again and then nearly blacked out. Donna was yelling at me, trying to get me to respond. I could hear her faintly, but I could not respond. I then came to. My skin was cold and clammy, and my clothes were sopping wet from sweat. I was super scared!

I really did not want to go to the emergency room. They would just mess up my chance at seeing a real surgeon who does this for cancer patients and other tough cases all the time. We decided I needed sugar and electrolytes after drinking water all day. I drank two Gatorades and had a big bite of banana. I got a little better, so I drank some more water and had another snack. Every morning I get on the scales and record my weight. I have for years. During all this, I got on the scale multiple times a day. On this day, I dropped three pounds in four hours even with all that I was putting back into my body! My blood pressure started being recognized again and after a few hours of monitoring, we decided to try to sleep a little. My bleeding had mostly stopped. I set my phone to alarm every hour on the hour. Each hour, I considered my vitals and then slept a little more. This fitful sleep, as little as it was, was welcome after not sleeping the night before. At least Donna could sleep for a few hours.

It was now Wednesday morning, and after Donna took Madi to school, we went to my appointment. After filling out the normal medical forms, I went back and immediately saw the surgeon. Since my urologist had filled him in on the history of Friday through Monday night, he asked me a few questions about yesterday. He confirmed this problem is exceedingly rare and said, “You want the bad news or the good news?”
“Give me the news, doc!”
“You must have surgery today and it cannot be here.”

I did not care where because getting it done today sounded great! He had his staff set it up. I promptly left his office and headed for the surgery center 35 minutes away if it weren’t for Atlanta rush hour traffic. Thankfully, the traffic, though slow, moved better than normal. We arrived, filled out more forms, and I was going into pre-op by 10:30am. This surgeon was not playing! The difference between an out-patient surgery center with a fantastic set of doctors and the emergency room grabbed my attention at every turn. Clean bathrooms, comfortable seating, pleasant lighting, friendly nurses guiding me through the paperwork and talking through what will be done, and so much more. Four or five other patients were there for various procedures ahead of me. They all went one-by-one to their operating room, but I did not have to wait long to be wheeled to mine. The anesthesiologist I had met earlier started the gas, and a nurse asked me to breathe deeply. He and I talked a bit about my job and we laughed at his lack of computer skills as he poked fun at himself. I remember nothing else until I was in recovery.

My blood pressure was still very low and was tachycardic. They pushed more fluids into me and the numbers all moved steadily better. I stabilized in about 20 minutes. At no point was it dangerous, just something to watch. I knew upon waking that I was better. Maybe I should say my body knew. It was deep seated knowledge that the bad thing that was happening had stopped.

Remember, at the start of this story, I wanted to make sure I did not have cancer. I still do not know, and will not know, the biopsy results for a while, but I am sure glad to have survived the nightmare of a biopsy! I appreciate and am indebted to the men in my life who prayed for me throughout this experience. These past few days have been horrible beyond explanation with many gory details glossed over, yet I am convinced God had His hand on me at all times.