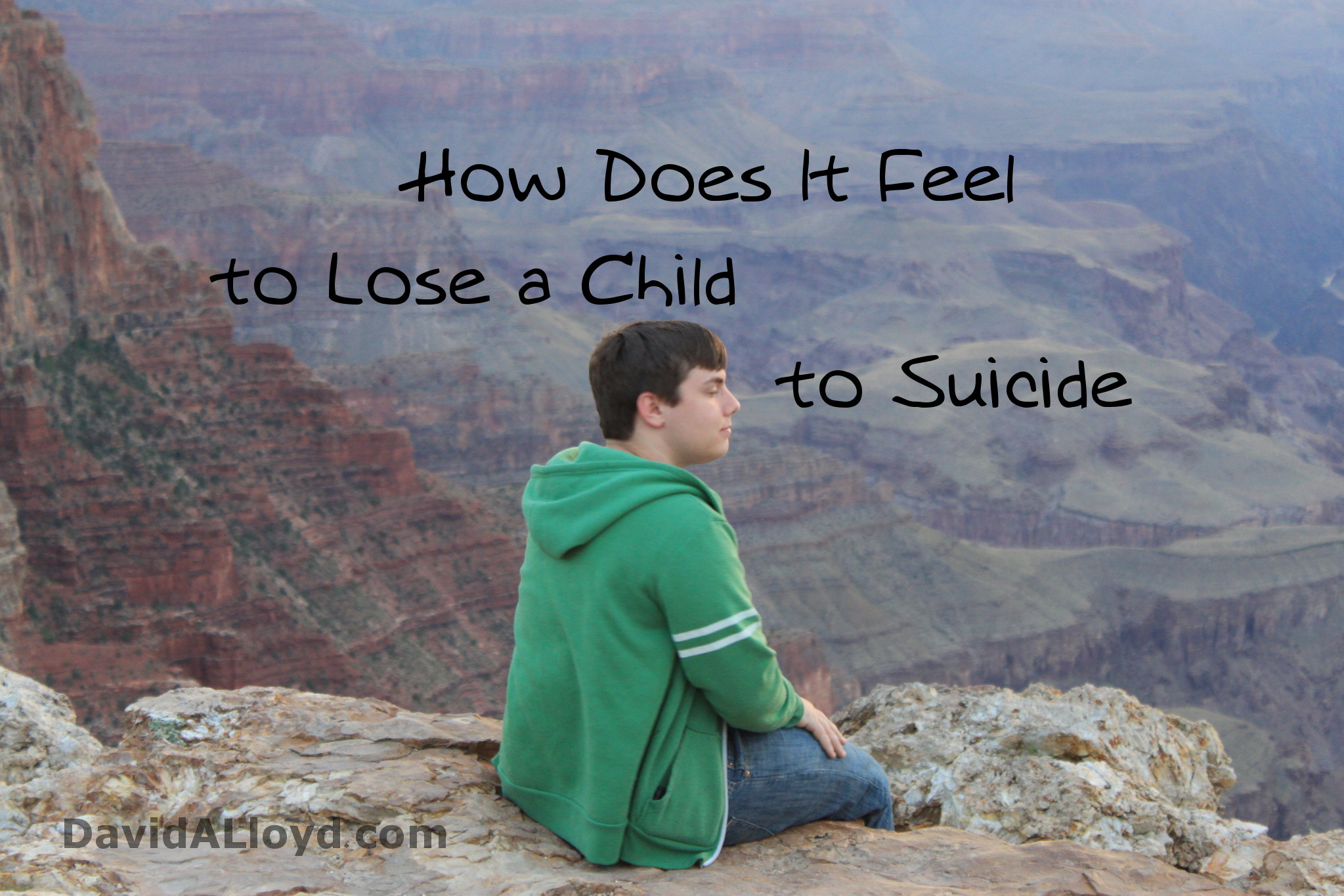 How Does It Feel to Lose a Child to Suicide

Often when I tell someone my son died by suicide, they say “I can’t imagine.” No, you cannot. I could not imagine it before when friends had it happen to them. There are no words which can convey the enormous weight, constant pain, anxiety, shame, guilt, emptiness, anger, love, but I will make a feeble attempt.

Just after noon on June 10, a train barreled through my front porch throwing me against the side of my house as 2 uniformed officers told me my son died. It slammed against the wall with all the air knocked out of my lungs. If I had air I would have been the one screaming instead of Donna. The pain I felt in that instant dwarfed all which preceded it. I have had my appendix removed, torn my ACL, fractured my skull, shattered wrist, and more but those were nothing. This day was not the worst pain though; that comes later.

I played out other alternative means to why he died, like an elaborate murder scene staged to throw off the manhunt. Then, I went weeks thinking Caleb would come walking in the front door. Maybe he went undercover and had to stage a death. Maybe he had to go into witness protection. He is a brilliant mind who joined the CIA, DIA, etc. Whatever the reason, he was not dead. I thought I heard him walking up the steps one day about to open the door. I jumped up to meet him there. Obviously, it was not him or anyone else. I think if I could see him for 15 minutes and talk to be sure he’s okay, I could go in peace.

My world crashed. The rest of the world kept spinning and I am out of sync with it now. So many things about what I used to do, things I am expected to do, make no sense. I hear people talk about their problems and wish it was my problem. In many cases it is a real problem and I pray with them but it is still a problem I’d rather have than this.

Heartache is too commonplace a word. Heartbroken is not right either. Imagine being stabbed through your heart with a broadsword and punched in the gut hard enough to knock all the air out. You cannot take out the sword because you immediately lose all your blood and die. You try to gasp for air but breathing in causes extreme pain and breathing out pushes more blood out. Your body does not breathe; it wants to be pain free. You must breathe to live so you learn to time it with not losing too much blood and just enough air to survive. You are surviving but just barely and it keeps the wound open. Every breath is excruciating and you feel the blood come out with each breath. This is as close as I know how to describe the persistent pain in my chest and feeling of a heartbrokenness so deep it feels like it pours out to the floor constantly.

Way back in the deepest recesses of my being exists a perpetual cry; a yearning for my son. Sometimes this builds up to a yell and comes out as tears but it is always there. A constant inner voice sobbing, asking “Why?”, or yelling. If I am talking or joking around, the cry is there. If I am working hard on software, the cry is there. I can sometimes suppress it, turn the TV up, or distract myself but it is there waiting for me to stop even for a minute.

I feel as if I failed as a parent. I am Caleb’s father and should be his protector, mentor, and role model. I have guilt and shame thinking how blind I was. Never mind the science showing I was not equipped to know. Forget the regular check-ins and well-being conversations I had. These inconvenient facts help me from beating myself up but do not stop me from questioning. I constantly ask Why and What-if and get no response.

My anxiety is through the roof. I used to have a little anxiety once in a while but this is different. ‘I sent a text 10 minutes ago and have no response so she must be in a ravine.’ When Donna was a little late coming home from work, I thought she was dead. I knew she would be late. Madilyn also was anxious and asked where she was every 5 minutes. These scenarios play in my mind repeatedly since last June. I also have fears Donna and/or Madilyn will die by suicide too. Many people think a survivor knowing the inflicted pain would not but statistically we have a much higher suicide rate.

With survivors having a much higher suicide rate you would think people would support them and check on them. Personal involvement is the primary defense known against suicide. Unfortunately, most people close to a survivor before the child’s death become distant or completely gone. The main support survivors get are from other survivors. Many do not seek groups and thus have little to no support. Since Caleb passed, I have had people not allow their children to play in my yard with Madilyn, not return phone calls and texts, and not talk with me when I was in their home. I am very blessed to have 2 very close supporters (other than my fantastic wife) and a few other good friends from ‘before’. I also have found several survivors who have helped me.